“Art Matters” was the statement emblazoned on Don’s favorite T-shirt.
He believed that giving freely of his time, knowledge and finances, whether in tennis, pottery, or other life pursuits was important and he acted on that belief.   He often taught tennis for little or no remuneration and Christopher met him when he was a tennis instructor at STLCC-Forest Park. Then they were reintroduced when Don served as an auditor in his ceramic class and he became a good friend to the WFF.

During his life, Don purchased artwork from visiting potters at the community college and hard-working artists at local shows, while working tirelessly to produce his own creative art in clay and other media.  Over the years Don donated many pieces of art to the Annual Show & Sale and, after his death, his estate continued to support the WFF, contributing art which funded the ceramics scholarship program for many years. 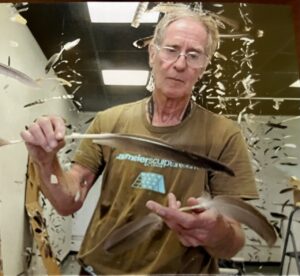